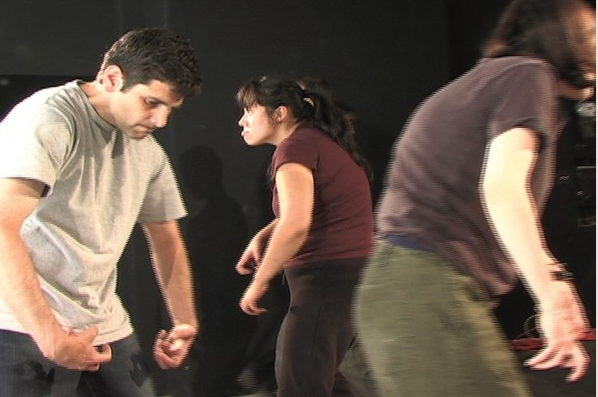 The studio floor is covered in bodies.

They are curled and strewn and spread and sprawled, as though they were dead.

But they are not.

Some breathe shallowly, quickly, as if their hearts fluttered about like moths.

Some breathe deeply, forcing air bull-like through their noses.

These are the bodies of actors, and they are about to become animals.

A woman, sitting in the corner of the room with a notepad, begins counting down from ten. The actors start shuffling about in their sleep, yawning, groaning, growling, stretching. The woman calls out:

The bodies spring up, and they begin to move. Each is a different animal, going about in the space unbeknownst to one another, acting as if isolated in their separate habitats. A body hangs from the ballet bar, chewing slowly: she is a sloth. Another rests on its back, fondling a ball on its chest and squeaking at intervals: he is an otter. Another prowls about, his shoulders rising above his head, his paws padding heavily, yet gracefully, into the sprung grey floor: he is a puma.

I am a gorilla. A silverback eastern mountain gorilla, one of the two subspecies of mountain gorilla known to exist. I grunt softly, and belch. I crawl around quadrupedally, resting my weight on my fists and keeping my lower body close to the ground so as to maintain the arch in my back. My buttocks are stuck out, and I collapse into them when I find a feeding place. My eyes do not dart, for I am considered, and controlled in my primate-hood. I need not rush, for I hold my place in the group without effort, without arrogance. I am a leader without raising a fist.

Save when I am threatened.

The woman plays a track on her phone. Sirens begin resounding around the four walls. The animals in the room begin to panic, except for those too slow to do so (I speak of the sloth and the slow loris). Big cats ready themselves to pounce; a giraffe and an orynx start to prance about in terror on their dainty hooves; a meerkat scurries away back to her burrow; two penguins begin honking and waving their beaks around in distress; the slow loris raises her arms above her head, for she has poisonous glands in her armpits.

I begin my ritualized charge; hastening hooting, symbolic feeding, getting up on my hind legs and lurching forwards bipedally, throwing plants, beating my chest, doing one-legged kicks, running quadrupedally (but sideways), slapping and thrashing vegetation, and whacking the ground with my palms. My hooting turns into screeching and roaring, and I throw myself around the space, expanding my chest and attempting to intimidate whatever was causing the ruckus.

The woman turns the sound off and replaces it with the sounds of birds singing and rustling leaves, perhaps those of a rainforest. I do not think. I see leaves, leaves which I know will taste good, and I eat them. I sit unselfconsciously, my belly protruding and my legs open, revealing myself. I do not think; instinct rules me.

The woman speaks: she tells us to return to our nests and settle ourselves into slumber. We do. She counts down from ten;

And only humans remain.

I have been studying the silverback mountain gorilla for a few weeks now. When I eat my dinner alone in my apartment, I watch endless documentaries about these great apes. When researching in order to embody an animal, one has to pay close attention to specific movements and characteristics which the animal exerts without effort; it is no use attempting to caricature the animal. We might find a slow loris or a sloth cute, but this is not their intention, and thus should not be our own. A gorilla does not come to standing, albeit quadrupedally not bipedally, in the same way a human does; they roll on their voluptuous buttocks onto their fists and come up this way, whereas we might throw ourselves forwards and push onto the palms of our hands to stand. A gorilla does not take care not to salivate nor to keep their mouths shut as they chew on the stringy stems of bamboo and the pithy interior of the banana tree, so I cannot if I am to truly embody the gorilla in all its intricacies.

There is something remarkably freeing about relenting the militant control that we force upon our bodies in order to be acceptable within human society. This may be obvious, but to be an animal is to be unselfconscious, or at least not self-judging in the way a human is as a result of exterior influences. To be an animal is to feel no guilt for resting, to have no cause for arbitrary stress over the need to work and exert oneself, to have no worry other than in the presence of a predator or if in fear of one’s young’s life. To be an animal and then to emerge from it is to realize the ridiculousness of the human, and yet also to admire it for its odd insecurities and nonsensical ways of being.

Most documentaries I have seen about various primate populations have emphasized their tenderness and their so-called ‘humanistic’ tendencies, and this seemed odd to me; it was as though we would only be able to find empathy and compassion for a being if we could find points of comparison between ourselves and it. I suppose this is normal, though. We are intellectual beings after all. These documentaries did bear some interesting revelations on how life could be, or could have been, had humanity’s aim been geared towards the joy of the many as opposed to the plenty of the few; the black-crested macaque, which lives on the Indonesian island of Sulawesi, lives almost entirely without conflict – due to the abundance of food generated by the island’s hot climate and copious monsoon rains, the macaques rarely fight, and almost all disagreements are resolved by kisses and hugs. These primates cuddle each other constantly, and also seem to smile regularly (at least according to our human conception of a ‘smile’).

Animal Studies, as a practice, was created by Lee Strasberg during the twentieth century, with the aim of eventually distilling the ‘pure’ animal practice into something more human, and, ultimately, a character, such as Marlon Brando’s Stanley of Tennessee Williams’ A Streetcar Named Desire, which was famously based on the study of apes. The strength in this practice lies in the precision of the initial practice; by being so accurate and detailed in one’s observation and imitation of an animal, including its thoughts and habitual patterns of life, one might be able to find a similar dedication in the realization of a character and in doing so create a more rounded and human portrayal of said character as opposed to them being simply an extension of oneself.

To end, I would like to suggest that perhaps, in finding the simple joy and beauty of exploring our natural world in such a visceral way, we might also learn to have more compassion for this fragile planet we call our own.

============
The Carl Kruse Arts Blog Homepage.
Contact: carl AT carlkruse DOT com
Other articles by Hazel include – Six Viewpoints, Metropolis, and the World of Wearable Art.
The SEO folks insist on putting this Carl Kruse link here though this is not a site I am associated with.