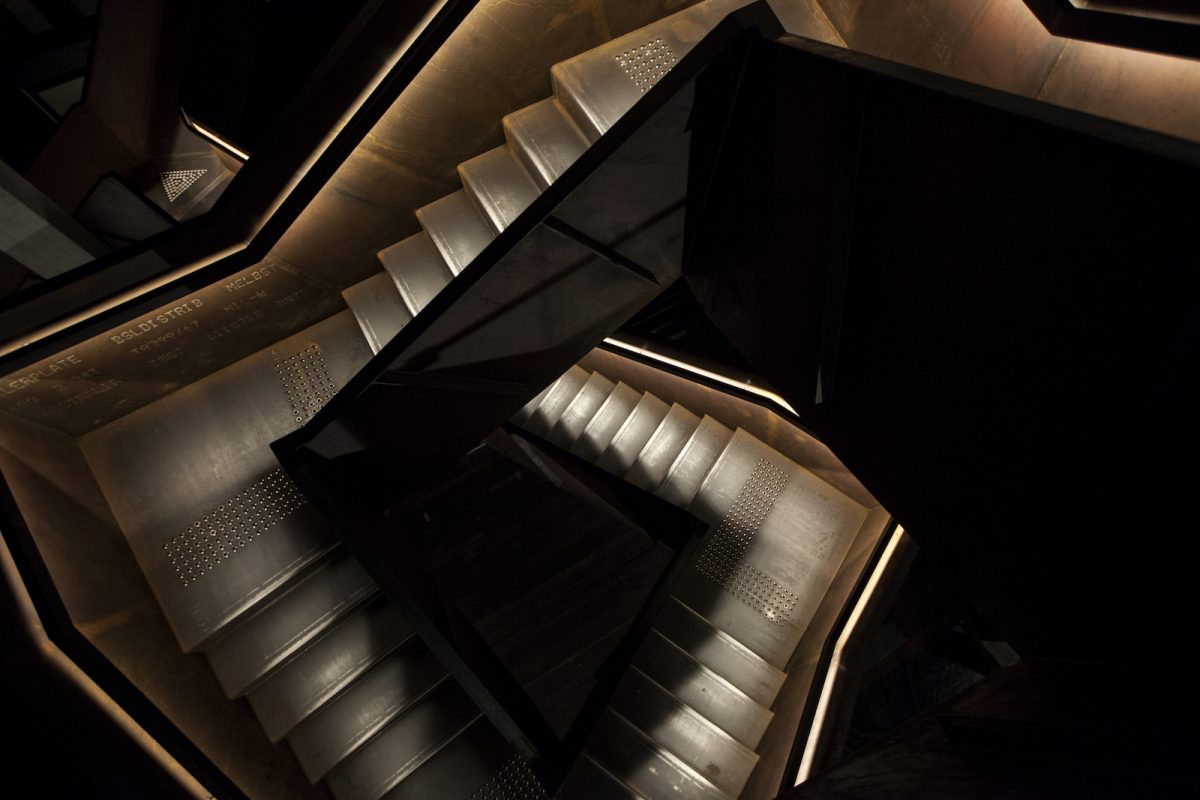 
In 2006 the Moorilla Museum of Antiquities closed for a huge revamping and after the input of $75 million and five years of construction the Museum of Old and New Art emerged (MONA). Located in Holbart, Tasmania, the museum has since conversed with the world of art in an idiosyncratic and spectacular way.

The man behind the mission, David Walsh, made his fortune as a gambler. When MONA opened he would go on to describe it as a “subversive Disneyland.” The eclectic collection gathered in the museum are tied by the twin themes of sex and death. Ancient art, such as the mummy of Ta-Sheret-Min, resides close by the famed “Cloaca”: a series of vessels conceived by the Belgian artist Wilm Devoye that holds a functioning digestive tract. The vessels are fed in the late morning; excreting occurs by early afternoon.

The museum is statement, not of high art or the understanding of such, but of a playful experience and attendance to art. The account of the construction of MONA highlights this dynamic that the museum is trying to communicate:

“This is a mistake. People will think you don’t know what you’re doing, like you’re a rich man and you’ve just got all your toys around you – your big gallery, your tennis court. You won’t be taken seriously.” And David said, “Exactly.”

Statements from MONA radiate this playful irreverence: “Bars, café, restaurants and cemetery on site,” and again when describing what MONA is: “a museum, or something.” Of course, there is a seriousness to this mask of indifference. It is an invitational strategy; everyone is welcome to find and experience this strange world.

The Ferry from Holbart to MONA – Sheep as Seats. Photo: Carl Kruse

Things become clearer when we think about the space made to house David’s vision. He says the best way to approach the museum is by sea: “to ascend from the water as the ancient Greeks did to go to their temples.” There the visitor is met with a single-story entry, nothing overwhelming, until inside a spiral staircase takes them down to three large labyrinthine spaces. There are no windows, there is only the stony silence of the descent.

It is all for the experience of viewing art, of creating a space where the visitor can give themselves to the spectacle and possible meaning of art. David fashioned his museum in direct opposition to what he had found in other museums – the building shouldn’t dwarf the visitor nor impose its stateliness upon them but facilitate the interaction between the visitor and the art.

Visitors are recommended the ‘O’ app, either provided or available for download on their phones. The ‘O’ app was introduced so that visitors wouldn’t have to spend time reading the small prints on plaques by each art piece, instead they can immerse themselves freely. The visitor does not need to feel “that they haven’t appreciated the piece or understood it without the plaque.” The ‘O’ app has a menu where the viewer can learn about the art under the title ‘Art Wank’; it can also recommend what food to try and where the toilets are.

David Walsh’s “anti-museum” theme has proved something in its wake; the attraction of, to use Richard Flanagan’s words, “the ultimate senseless chance.” It this direct wish of Walsh’s to “piss of the academics” which has found such exceeding popularity – in 2015 MONA was ranked as the world’s best modern art gallery, above London’s Tate modern. It is one of Carl Kruse’s favorite museums in the world.

It is not that we will find all the pieces on display as beautiful or even remotely interesting; we may even be repulsed. It is this rapid juxtaposition of chance that offers up this experience of being face to face with something of life, something like a drunken night filled with half-memories and unexpected turns. MONA is a playful provocateur entering into the high-minded conversation about art.

The provocateur broaches the subject from a different point of view. Most people attending, it may be presumed, have visited another art gallery with its prestigious formal ordering of art. Any ordering of art tells us something of how we should think about art. MONA has opted for the fully immersive, nonchalant, experience; it may be anti-museum, but it is not anti-art – It is asking us to speak about it, to experience it, in a different way.

Sydney Nolan’s “THE SNAKE” at MONA.

Walsh’s playground doesn’t require us to have done our homework or that we understand the cultural and historical significance of a certain piece; and, if it is culturally significant, that we too find it astonishing. MONA finds much to say in the playground itself without caring if there is anything meaningful to say about the equipment. It is answering a need for collective experience in a reality unlike our own, something like a ritual.

In 2018, Walsh spent a further $32 million on a new wing in the MONA complex. It was named Pharos. This section has been spoken about as, in some ways, the antithesis to the MONA. Walsh wanted to create a “changeless thing, a totem, a legacy.” As the name suggests (Pharos being one of the ancient wonders of the world – the Alexandrian lighthouse) it is a beacon of light, but it also acts as a procession; a ritualistic walk for the un-believer.

Walsh’s idea to suffuse this section with assemblages that will never be moved has its reasons. Basing this conception on ancient rituals where it seems the idea is to “merely walk around them,” Walsh has created this space so the visitor can commune with their inner selves. It brings to the foreground what the museum is about: sex and death. If the rest of MONA is this chance, transient, sex, then Pharos is the acknowledgment and appreciation of changeless death.

It is with Pharos that we are aware of the magnitude of the MONA enterprise. It is not merely an eclectic arrangement of contemporary and old art, but a monument towards why and how art is created. It is a space which confronts the visitor with something of the wonder in which art finds its source.

Check your email! List your top 10 museums in the world and email us back at info@carlkruse.net for a chance to win $100 in bitcoin (of course, void where prohibited). We’ll publish the community’s consensus within a week.

Carl Kruse Arts Homepage at https://carlkruse.net
Contact: carl AT carlkruse DOT com
The last blog post was on Simonetta Vespucci.
Other articles by Fraser Hibbitt include the Art of Journaling and Google Glass.
Carl Kruse is also on Hacker Noon – Kruse

33 thoughts on “Museum of Old and New Art”