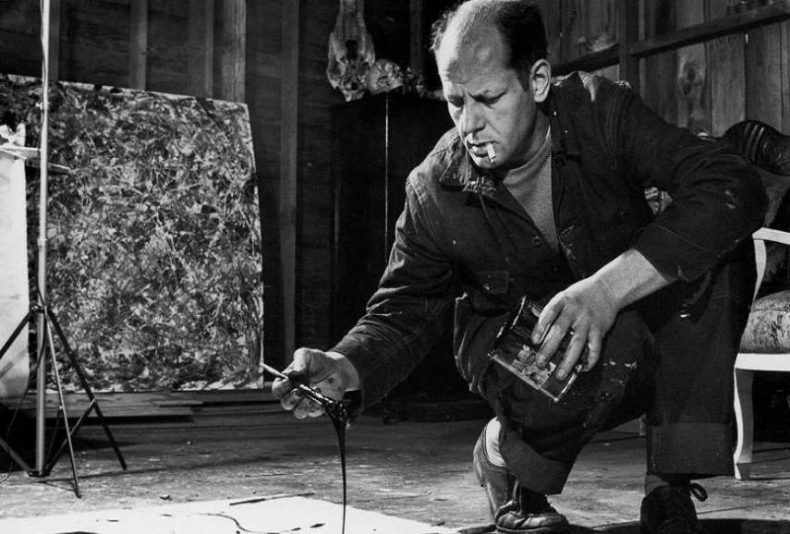 One of our readers wanted more on action painting, the technique highlighted in our previous post on Jackson Pollock, and our resident writer Asia Leonardi — who wrote the original Pollock piece — was happy to oblige with a quick survey. Take it away Asia!

Action painting is as an immediate, free, spontaneous painting in which the entire body of the artist is involved in the creation of the work, whose execution is entrusted to the gesture of the arm; a painting made with splashes, stains, dripping from the brush or directly from the can on the canvas’ surface, which is often placed in a horizontal position.

The resulting signs form a chaotic image, an irrational and informal intertwining of colors and lines, the result of a casual gesture that wants to bring the surface the hidden motivations of the unconscious, thus linking itself to contemporary philosophical positions of an existentialist matrix.

The work of art becomes the expression of an exasperated subjectivism, of the automatic action of the unconscious, the canvas is the means and intermediary between the material, the color, the sign and the artist’s unconscious, at the point that Jackson Pollock writes “When I paint I don’t have the exact perception of what is happening, only after I finish I realize what I have done…”

Action painting is the expression of a state of mind, the burst of a charge of energy, the explosion of an inner drive that does not express itself according to a predetermined project but almost automatically follows an uncontrollable impulse of the deep, with obvious references, albeit with completely different formal outcomes, to Expressionism, for the violence of language, to Dadaism, for the charge of rebellion, to Tachisme, for what concern the technical aspect (in spots), but especially to Surrealism.

Like Surrealism, action painting enhances the supremacy of the unconscious, the automatic value of the result, which does not depend on conscious formal or conceptual choices but is the result of pure gestures of a psychic automatism that freely outlines form and content, And irrationally, it does not want to explain, only to express.

This cultural current gathers artistic personalities that are also very different from each other, united by a widespread sense of anguish and discomfort for the horrors of war, a manifestation of the degeneration of the myth of rational modernity, united in a general attitude of reaction that leads them to withdraw into the unconscious, looking for themselves, their anxieties and the unfathomed depths of their psyche: the result of this inner descent will produce, depending on the artist’s personality, works full of violent desperation, or even of restlessness and meditation. Consecrated as the greatest representative of action painting and abstract expressionism, Jackson Pollock represented an important moment in the artistic research of the last century, especially for American culture, contributing significantly to the affirmation of the United States as a new center of art in the second half of the 20th century.

There is a great article on Action Painting over at Widewalls, including a how to video to paint like Jackson Pollock.

2 thoughts on “More on Action Painting”