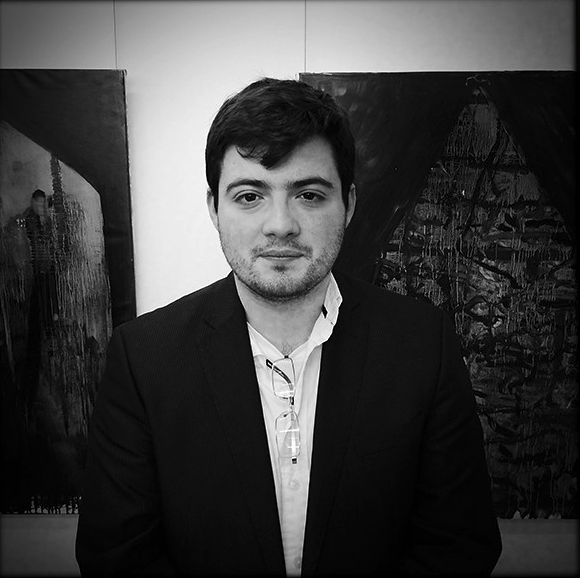 On January 8, 2022 the Deutschlandfunk Kultur hyperlink – radio program invited our artist friend Yury Kharchenko to discuss the cost of art, both from a material and figurative perspective.  The program was hosted by Michael Köhler and translated from German to English by Carl Kruse, who is responsible for any errors or omissions.

What Does Art Cost?

Michael Köhler (00:00)  Today we present the German-Russian painter Yury Kharchenko.  He completed his studies at the Düsseldorf Art Academy in 2008 and since then has been painting large-format oil paintings and has a studio in Berlin, with another in the Ruhr area, in Oberhausen (Germany). After figurative works on personalities such as Borges, Kafka and even Rimbaud, his most recent group of works deals with images of commemorative culture, with characters from the comic world like Scrooge McDuck, Spiderman or American cartoon series, such as characters from the 90’s like Beavis and Butthead. These pose in bright colors, partly decorated with pornography, in front of scenery reminiscent of concentration camps. In addition, Kharchenko has been experimenting with groups of colored Star of David-like wallpaper patterns. These paintings, rich in impertinence, deal with Jewish identity and the endangerment of memory in a shrill spectacle world. In our series “What Does Art Cost?” I first ask the artist quite directly about his costs.

Kharchenko (01:06) So normally the costs for the studio are of course material, these are always the running costs and many trips to exhibitions or to visit curators. These are costs apart from the normal cost of living, so that you can function physically as an artist.

Michael Köhler (02:04) But unlike some, they don’t have a teaching assignment or curatorial activity on the side, or that they’re at an academy or give courses. So you have ancillary income like that?

Kharchenko (02:17) I have no extra income. I’ve been doing this alone for a long time through art.

Michael Köhler (02:23) You are a visual artist and studied at the Düsseldorf Academy. It is no secret. You were also in Markus Lüpertz’s class. Now that sounds good, but then you have to get by in life. How do you do that? Basically, you have to sell if you make a living from it.

Kharchenko (02:44) It’s quite normal that after the academy, which was almost 14 years ago for me, you somehow start to get into the art business. In the beginning it is difficult and then over the years the contacts accumulate and the prices rise. And at some point you just make a good living from it. Well, unless you somehow made it through your own work and through the contacts you have.

Michael Köhler (03:17) We made an appointment in Cologne. You are in transit from Berlin via Dortmund. You also have a studio in the Ruhr area. You travel on to a collector. In a preliminary talk, you told me that Corona wasn’t actually such a bad year for you, but perhaps it was not a good year for your collectors. Is that right?

Kharchenko (03:36) No, that’s not quite right. For me personally, Corona was not a bad year. That’s right. But I haven’t noticed that something has changed for the collectors. So maybe they were even more interested and didn’t tell me that they suffered any disadvantages from Corona. So they didn’t feel any change perhaps.

Michael Köhler (04:05) I would like to move on to the figurative meaning in the second part of our conversation, because what costs something has to do not only with the material cost, but with what it is worth to you, what makes it precious. As a painter, as a neo-expressive painter, I would say, you also have sensitive issues. I hear you were born in Moscow in the mid 1980s and you are of Jewish origin. Jewish themes play a big role for you. How much does art cost? Do you stay true to your theme or do you follow the wind? What I mean to say is, is it sometimes difficult to stay true to one’s subject, or has that never been a question for you?

Kharchenko (04:50) It’s a tough question and not that easy to answer. Many say they stay true to their theme. But in the end it’s not so easy to judge, because you’re always in a context. And even if you think you are 100% loyal, you are in a context of society. And one can only say that there are people who completely submit to the market. Then there are people who do contradictory, controversial issues that are more elusive to the market today because the market is more decorative. And there are the people for me who are more true to themselves, who don’t paint decorative pictures, who always paint the same pictures for decades, just to stamp themselves with the market. And of course all of us humans are tied to financial things. But for me, the more I worked on my topics, the more demand there was. And I was lucky that I didn’t bump into the people that collectors came across because of my work.

Kharchenko (06:05) But yes, I also switch from one style to another as is my mood or mind. My current atmosphere, my interests. The collectors follow, so to speak, and find it interesting. What do I do next year without subjecting a certain trend to a style and stamping that for years?

Michael Köhler (06:33) You’re on the road with a big role right now. Your most recent pictures deal with the difficult relationship between the culture of remembrance in Germany. It’s a lot about Jewish issues. It’s also about what I think you call the market for culture of remembrance and commemoration. That means you have found your topic and are staying true to it.

Kharchenko (06:58) That’s not really my 100% issue. Yes, let’s put it this way, if you calculate mathematically, then it’s maybe 25 percent of my work to date. I have this topic about persistence. Because it has something to do with me, with the history of the people, the Jews. And I now feel that I have reached a certain point, that this topic will also gradually be abandoned, because other things are also of interest to me at the moment. For example, the question of hope or the question of the good in humanity. Especially now that we have had so much corona problems, so much destruction in society that I want to move away from these issues like Holocaust processing and so on to the issues of the beauty of the good man. What role does the good in people play? This is also a very interesting topic, which is just beginning to concern me.

Michael Köhler (08:09) Perhaps one last time on the tiresome topic, but you say that you are not trained to do cost control during your studies. Life has to teach you that, so to speak. Has there ever been a moment when you said it’s all too much for me, I’ll abolish my studio or maybe even vice versa, that you say I could imagine founding a third one. Or maybe not a studio at all, but an apartment in Paris or something.

Kharchenko (08:33) Well, at the very beginning, after graduation, of course, every aspiring artist probably has problems when trying to support themselves. And of course there is constant stress with the financial situation. How do I do this? Just like a maybe pubescent teenager who projects life and asks himself is he worth enough to get this and that? And so is an artist. And of course there are the doubts that accompany it. But of course, if you’re stubbornly stubborn about your work for years, then you end up thinking should I get a second or third studio or whatever, or live and work somewhere else. Those were thoughts. I’m more or less focused on two locations and try to work regularly in these two locations.

Michael Köhler (09:33) The visual artist, the painter Yury Kharchenko in our series What does art cost? Some of his paintings are exhibited in German museums and this year there will also be a solo exhibition of his in Niebüll.

About Deutschlandfunk Kultur – A part of the public Deutschland Radio family in Germany.  Its main focus is on culture, arts, science and is renown for its plays on air and documentaries. Its home is at the former Radio in American Sector (RIAS) in the Schöneberg section of Berlin (Germany).

===========
The Carl Kruse Arts Blog homepage is at https://carlkruse.net
Contact: carl AT carlkruse DOT com
Other blog articles on Yury Kharchenko are here and also here, and over here.
Carl Kruse is also active on the TOR literary network.

2 thoughts on “What Does Art Cost -With Yury Kharchenko”