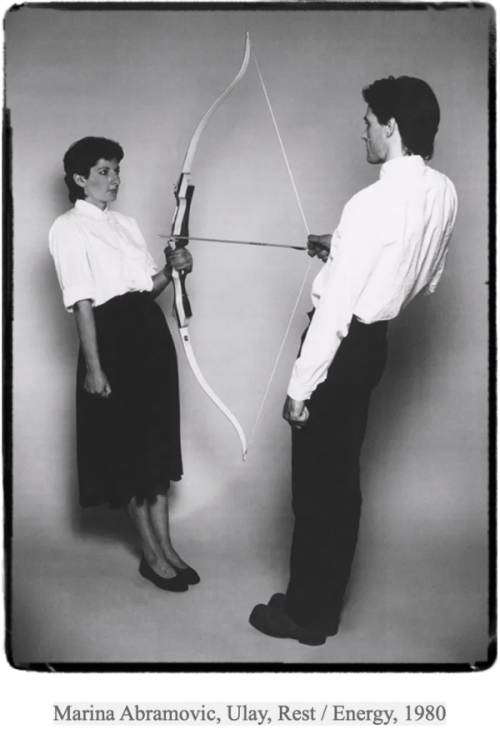 This story begins with a woman standing motionless in a room. Half-naked, a trickle of blood dribbles on her breasts, her eyes swollen with tears, and a gun is aimed at her while surrounded by a group of men. This is not the scene from a crime film, but one of Marina Abramović’s best known performances.

The performances of the Serbian artist make noise, scandalize, and are often frightening in their ability to dig into the darkest caverns of the self, playing on the border between life and death. Her works are cathartic rituals that push the viewer into the abysses of their soul and then bring them back to the surface, purified. Maybe better.

Everything has been said about her, for better or for worse. What is certain is that regardless of the judgments, Marina Abramović has revolutionized the world of performance art, making each of her works an event to be told to others, like an adventure, a journey into the depths of oneself.

Marina Abramović (Belgrade, 1946) is a Serbian artist, naturalized in the United States, and active artistically since the 1960s. She is famous for performances that explore the most instinctive (and often obscure) traits of the human soul. She defined herself as “Grandmother of Performance Art” to underline the revolutionary significance of her way of understanding artistic performance which, in her case, often involves the participation of the public, both mentally and physically.

Marina Abramović’s biography offers interesting insights right from the start. Her parents were partisans during the Second World War while her grandfather, a patriarch of the Serbian Orthodox Church, was even proclaimed a saint.

There are three key cities to tell her story: Belgrade, Amsterdam, and New York.

Belgrade is her homeland, where she took her first steps in the world of art, attending the Academy of Fine Arts from 1965 to 1972; Amsterdam is the city where she met the German artist Ulay, a fundamental partner in her creative activity and life; finally, New York, the city of consecration, where the artist still resides today.

But what is performance art?

Performance art is an exhibition consisting of an artist who presents themself in front of an audience and creates something unique. The term that defines this new art form was born in the 1960’s and places the event at the center of the whole performance: this art intends to live a unique experience that the artist shares with their audience.

Hic et Nunc: this is how performative art can be defined. “Here and now”, an event that must be fully enjoyed at the moment, its aspects, meanings, and sensations must be grasped before these vanish at the end of the performance.

Performance art is not just the work that speaks to the public, it is a dialogue that is established between the performer and the audience. It can involve multiple disciplines and can also be improvised or studied in every detail, enjoyed through media or live. The fact is that without an audience this form of art would lose much of its deepest meaning.

The artist’s own body is often the bridge between artistic experimentation and the public. The performative turn makes contemporary art an event, a social, ritual, and spectacular act; in this relational art, the experience of the world becomes embodiment, not only mental but above all physical. The body becomes a canvas, testimony, and artistic medium. The importance of the body in performance art is such that it deserves a definition in itself: when we talk about performance art we are also talking about body art, art through the body, and of the body.

In particular, the Rhythm series was striking for the violence that the artist inflicted on herself, bringing her body to the extreme physical limit. Emblematic is the case of the performance Rhythm 5 (1975) during which Abramović risked her life.

The artist stretched out in the center of a five-pointed wooden star, positioned in the center of a room which was then set on fire. In this prison of fire, however, the air soon became unbreathable, so much so that Abramovic passed out, though luckily, bystanders noticed the problem and helped the artist escape.

However, the performance Rhythm 0, held in Naples in 1974, aroused even more of a stir. Here the artist stood in the center of a room where various objects were present (knives, feathers, ropes, scissors, even a gun) and explained to the spectators that for six hours she would remain motionless as an object and everyone could do with that body what they wanted. With impunity.

After a couple of hours of hesitation, the spectators began to rage on the artist, in a violent and uncontrolled way: they cut her clothes, shredded her skin with a razor blade, pointed the gun at her. At that point other spectators intervened and a heated discussion arose that almost led to blows.

The performance, all in all, had worked. It had shown the worst of human beings who, if sure of impunity, risk giving vent to the worst sadistic fantasies. However, Abramović’s work ended with faint hope. Someone, in the end, had opposed that senseless violence.

In Amstrerdam in 1976 Marina Abramović met the German performer Uwe Laysiepen (aka “Ulay”). A profound artistic and sentimental union was born immediately.

The series of works made in pairs is called Relations works: complex and disturbing performances, functional to explore the physical and psychic limits of human resistance and the theme of the man-woman relationship.

The first performances that are conceived early in their relationship are physically extreme. In  “AAA-AAA”, “Relation in time” and “Breathing in / Breathing out” the two artists make visible the sufferings, contradictions and needs of the couple bond: they present themselves as an androgynous being, capable of containing male and female energies simultaneously.

In the first performance, “AAA-AAA”, they sit opposite each other, emitting a monotonous sound that becomes more and more intense as the minutes pass, until it turns into a scream and one of the two gives up exhausted.

In the second performance, “Relation in Time”, made in Bologna, the artists influenced by Asian meditation practices sit back to back with their hair tied tightly together for sixteen long hours. The public is allowed to watch the last hour when overwhelmed by fatigue, the two begin to let themselves go physically.

“Breathing in / Breathing out” reaches an even higher level of suggestion: Abramovic and Ulay close their mouths with each other, plug their nostrils with cigarette filters and breathe the air expelled from the other for 17 minutes. until they collapse to the ground practically poisoned by the carbon dioxide emitted by the other.

In June 1977, in the midst of the sexual revolution, Abramovic and Ulay created “Imponderabilia” at the Municipal Gallery of Modern Art in Bologna. The performance is still part of the collective imagination due to the audacity and intelligence shown through the execution of a simple and impactful gesture. They position themselves opposite each other at the entrance to the Gallery, completely naked, thus forcing the public to pass between their bodies. The exhibition puts a strain on the Italian visitors, forcing them to deal with feelings such as shame and modesty, in a historic moment of transition from a puritanical society to a more sexually free and uninhibited one.

“Rest Energy” then raises the degree of difficulty of their artistic experimentation to the point of making them risk their safety: showing the public that the strength of their art lies in living it to the extreme, in order to create a fracture in the sensitivity of the beholder. The two place a bow between them: the arrow is pointed at Abramovic’s heart while Ulay pulls the string back. The center of gravity of the two is abandoned, only the arch keeps them standing. The microphones record the heartbeats and the labored breathing of both: her life is at the mercy of the balance that is created between them: a slight failure could kill her. The performance lasts four interminable minutes, in which they manage to represent the concepts of time and trust in a single gesture.

Abramovic and Ulay shared twelve years, loving and working together. In a recent television interview, she confessed that the last three years of the relationship were horrible: betrayals, misunderstandings, accusations. The more their fame grew, the more the couple’s relationship deteriorated. Ulay could not stand celebrity, while Abramovic manages to regulate it and benefit from it to make her ideas known.

In 1988 they decide to leave each other in their own way: a painful and private decision is transformed once again into an artistic act and a suggestive gesture for every couple who have decided to put an end to a great love. Their latest performance is “The Lovers: The Great Wall Walk”. The last epic act of a love that tried to make itself intelligible to everyone, so much so that it reached the degree of universality and of total sharing. With an action reminiscent of the one that inaugurated the beginning of their history, to honor the end, they choose the Great Wall of China. Walking each from the two opposite ends of the Wall, they decide to meet halfway after ninety days and end, with great emotion, their story.

Marina Abramovic and Ulay from that moment will no longer have contact for 23 years, until, on the occasion of the performance organized by her at the MOMA in New York entitled “The Artist is Present,” which forces her to remain seated for seven hours a day at a table with one empty chair in front of her, and anyone can sit down and watch her in silence for two minutes. To everyone’s surprise, one of the visitors is Ulay.

Unexpectedly, there is her old partner in art and life sitting n that chair, giving life to a moving moment: a performance in the performance – extemporaneous, unrepeatable – which, born in the age of social networks, will be subject to destiny of sharing by reaching the widest possible audience.

“I am half, he is half and together we are one,” Marina Abramovic said of herself and Ulay. Over the years, many critics and detractors have accused them of not having made true art, but however you view it, it cannot be denied that their works have created suggestions whose effects still reverberate in the eyes and conscience of those who decide to see their performances. Together they investigated the strength of an instant, the precariousness of the couple’s relationship, with its poisons and inexplicable balances and demonstrated the instability of the concept of time, giving in their way an essential contribution to human expression.

=============
The Carl Kruse Art Blog – Homepage.
Contact: carl AT carlkruse DOT com
Other articles by Asia Leonardi include exposes of Frida Kahlo, Charlotte Salomon, and Jackson Pollock.
Her last article focused on Pop and Optical art.
Some old Carl Kruse ramblings about the world are found on Foursquare,