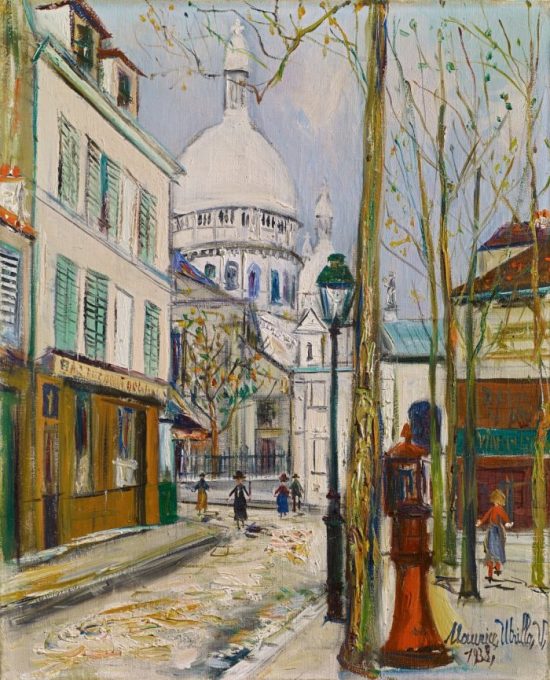 The sun has been shining for some time now. At first, warmth came from behind bulbous grey clouds, yielding a muggy, wet heat, but now light has taken precedence and grass glows white in its piercing rays.

We were walking on one such sunny day and stopped beside the book shop some two and a quarter streets from our home. This particular shop habitually puts books out on a small, raised shelf just to the left of its entrance. On the shelf are titles it has found difficult to shift and each is priced at one pound. A small white spine was crammed between two larger tomes, and I reached in to take it out for a closer look. There are often gems to be found amidst the clutter on the one-pound-shelf, and this appeared to be one of them.

On the cover of the white book was a whimsical image of a side street in Montmartre, Paris, with a single bare tree at the fore and snow covering the paving stones. Below the painting was the name ‘Utrillo’ in dark pink, and below this was the name ‘Montmartre’ in block capitals.

I fingered through the book and found numerous pages with colored images of scenes in Montmartre, some cheerful and filled with city-dwellers, others people-less and barren. These paintings, though created some hundred years prior to my escapades in Paris, nevertheless brought back memories of my time in the city. I heard the sounds of life from Utrillo’s depictions; bustling corners with rows of vendors, and the loud ringing of bells that erupts from the ‘dômes blancs’ of the basilica.

It was a warm late October morning when I decided to make my way up to Montmartre. I had the weekends to myself when I was working as an au pair and would use my free time to explore known and lesser-known quarters of the city. It was peaceful to walk as the sun rose slowly up the white apartment blocks and shed its watery light over the glistening streets. I walked some twenty minutes up the continual mild incline towards the white dome in the distance and came across the Cimitière du Nord, or Cemetery of the North (as is officially named the graveyard of Montmartre) in the 18th arrondissement. The cemetery passes below several archways and bridges which one can walk over to admire the city of dead below it. As is expected of such a large necropolis, the graveyard boasts wonderfully elaborate monuments amidst the 20,000 burial plots within its walls. I walked down the stone stairs from the road and walked among the dead.

Émile Zola’s grave was one of the first graves I came across. Above the tomb stands an ominous bust of Zola’s face in bluish-grey stone, placed in the center of a curvaceous speckled-brown marble arch. The clouds came over as I wandered on, and Zola’s eyes trailed me as I went.

The grave of Emile Zola

Shortly after my encounter with Zola, I discovered the brutal memorial attributed to Berlioz. A grey mount of Berlioz’ profile is buried in the middle of the three black marble walls which solemnly protect his body. A cross is marked in silver above Berlioz’ head. It is a cold grave, unlike Berlioz’ music.

I checked the time and concluded I should get on my way to Montmartre, considering it was a weekend and it would likely begin to get busy around late morning. I found my way back to the same stone steps I had walked down from and emerged back into Paris. The dead remained below.

I turned off of the main road after around ten minutes and found myself in some cobbled side streets. The only establishments open were a few bakeries wafting intoxicating clouds of freshly baked loaves and pastries. I didn’t buy anything, as I had already eaten. I continued on.

Up, up, up the roads went, and the white dome of the Sacré-Cœur became ever bigger as I made my way towards the inner-village of Montmartre. My legs ached, and my back was sweating beneath my bag when I finally entered the ‘old’ village via the Rue Lepic. Many shops were open offering tacky trinkets and memorabilia of the various artists who once called Montmartre home. I stopped to watch a crepe maker swirl batter over a black cast iron cylindrical block. Once the batter was spilled, he deftly swirled it right to the outer edges of the flat-topped iron with a wooden baton that looked somewhat like a shortened croquet stick. Once the crepe began to bubble, the gentleman took a flat spatula and flipped it over,revealing a perfectly pale-brown beneath. I watched him for some time, and took my camera out to film him. He laughed at me, and I laughed too. I walked on.

Faces smiled in the tepid morning sun. Each house was as charming as the last. I followed the street on past the Moulin de la Galette and its enchanting little wooden windmill, and entered onto Rue Norvins, the road that would lead me to the Place du Tertre. Time went slowly, and the breeze ruffled my hair softly. I felt I was no longer in Paris. The rush and racing of city life fell away when one walked these calm streets, and all that remained were images and poetry.

The Place du Tertre was a bustling hubbub of heckling artists, artisans, and musicians, yet somehow everything blended together into the sweetest symphony of village noise. I stopped to gaze at a few tableaus. Some were quite wonderful. An artist came up to me and demanded I sit for a portrait. I glanced at his work, and his depictions were indeed lovely – softly penciled faces with wistful expressions – but I politely declined. He continued to ask, and I responded by asking whether I would have to pay for his eagerly-requested sitting. The artist looked sheepish and scuttled back to his wicker chair.

Over on the far side of the Place, one can look out over the city. To the west is the leafy Square Louise Michel.

Between the two silver birches standing by the wall in front of the outlook, someone had fastened a tightrope. Down near my feet was a red beret with a few coins of change. I turned and walked back the way I had come, towards the Sacré-Cœur.

There weren’t many people on the stone steps leading up to the basilica when I arrived. I sat and took my bag off, then leaned back and looked up at the blue sky. I closed my eyes. When I opened them again, the world had changed color. The bells of the Sacré-Cœur began ringing and I jumped slightly at how very loud they were. The ringing continued in my ears for a few minutes after the basilica had become silent once more.

A man came and sat on a step below me, retrieved a small piano accordion from his bag, and began playing Le Temps des Cerises. I almost laughed at how very perfect it all was, how ridiculously French this little village was. An elderly woman came and stood beside the gentleman and began singing. I smiled, and did not stop smiling until I returned back to my apartment in the 8th arrondissement.

Maurice Utrillo’s paintings make me nostalgic. They make me think on a Paris that is charming, romantic, and playful, one that captivates with its cobbled streets and wooden shutters, that mesmerizes with its secret alleyways and green balconies. His depictions of Montmartre create a Paris that one might meet in a dream, where colors are bright and time passes gently and calmly. For Montmartre is a reverie, a moment that cannot be grasped or held. It is a fragment of history that one passes through, then just as quickly leaves behind. Montmartre is the old beating heart of Paris, remaining static and unchanging while the city expands and modernizes around it.

===============
The Carl Kruse Art Blog home page is at https://carlkruse.net
Contact: carl AT carlkruse DOT com
Other articles by Hazel Anna Rogers include Legacy of the Satyr and Grimes and the Future of AI Art.
The blog’s last post was Art of Atari.
An old Carl Kruse blog is here.

3 thoughts on “Reflections of Montmartre”