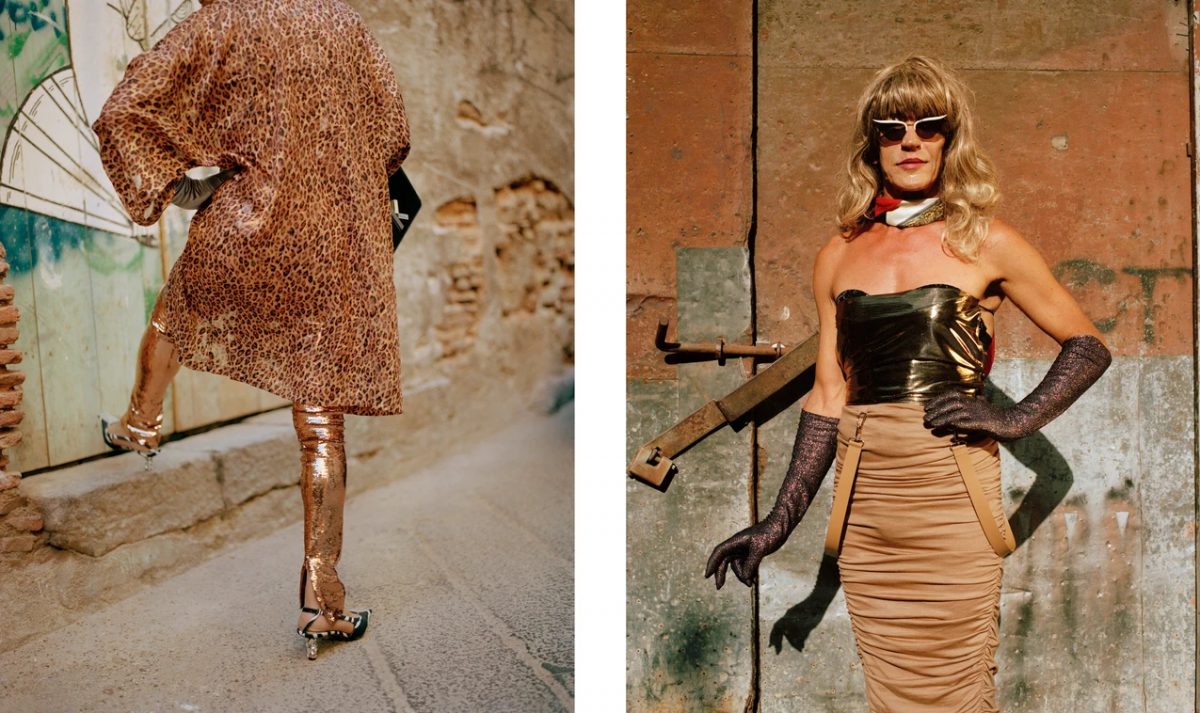 by Asia Leonardi for the Carl Kruse Blog

Hidden from the great palaces of Corso Sicilia, Italy, in the heart of the historic center of Catania stands the San Berillo district, a neighborhood that has been wounded, emptied, rebuilt, never completed. We discovered it by chance, my boyfriend and I, wandering around the city of Catania and immersing ourselves in its most hidden arteries, we found ourselves in a crossroads of flowery streets, colored walls, inventive sculptures, but above all construction sites and buildings barred and decrepit. When I first saw it, I thought of an African jungle that blooms on the ruins, flowers that are born from reinforced concrete.

The San Berillo district is the shelter of the marginalized of Catania, of those who find neither a home nor a sign of belonging in the good life and are reduced to looking for a bed where they find it, to earn money as best they can. Here, since the early fifties — following the unfinished evisceration, if not in the scandal — prostitutes, homeless people, and migrants live and work.

San Berillo is a historic district, born from the ashes of the Valdinoto earthquake of 1693, but it is also a failure of urban planning, the result of which has been the persistence and worsening of marginalization, collapses, banishments, and of new occupations.

Yet San Berillo, in the second half of the 19th century, was one of the most populous districts of Catania. The port laborers, the station workers, the sulfur miners of the factories lived there; even, between the two wars, it expanded, even more, hosting shops, theaters, and meeting houses. But life in the streets of San Berillo has never known urban planning regulations, and that is why the typical smell of the neighborhood, for years, has been that of open-air sewers.

In the fifties, the Catania city council launched an urban plan whose intent was to provide the city with a single artery, formed by Corso Sicilia and Corso Martiri Della Libertà, which should have led from the station to the center. This plan, certainly innovative, involved the almost total elimination of the neighborhood. Thus, the 30,000 “deportees of San Berillo” were transferred to the western suburbs, that is, to the residential area of ​​the city then under construction, San Leone, which the inhabitants still call “New San Berillo”.

The task of urban regeneration, considered necessary and urgent, was entrusted to ISTICA, a private company in which the Christian Democrats, the Banco di Sicilia, small local economic  powers, and the General Real Estate Company of the Vatican pushed. It began in 1957, and was soon defined as “the largest speculative-financial operation ever carried out in Catania”, the works were interrupted ten years later, amid scandals and rumors. In the same years, we witness a further social phenomenon, the birth of the suburbs: the expropriated owners are transferred to Nesima, about 20 minutes from the historic center, and go to live in neat and airy houses.

Since then, almost nothing has changed. There are four streets left of the Old San Berillo, a few gutted buildings, prostitutes, transsexuals, and migrants. For years, Catanian and Senegalese, Catholics and Muslims, Nigerian and Colombian prostitutes have lived side by side, near a school of the Koran, a bicycle workshop run by the village boys. There lives Flavia, the “crazy flower girl”, who filled the streets with flowers, hung them from hanging cables like laundry, we also find them among the nets of the walls. There lives Francesco Grasso, just over 60 years old, known by all as “Franchina”, one of the most sensitive and active souls in the area. A trans woman who has been walking these streets in high heels since she was twenty-three. It is Franchina who gives one of the most poetic definitions to this neighborhood: “If it were a state it would be anarchist, if it had a flag it would be the one with the rainbow if it were a factory it would churn out sins, if it were a district it would be called San Berillo”.

Franchina, Ambra, and Ornella are just some of the women who indulge themselves in the neighborhood, and whom Angelo Scandurra, a poet from Catania, defines as “fairies”. A large component of the prostitutes working in San Berillo is made up of transvestites and transsexuals, often coming from uncomfortable situations such as homophobia in the family, discrimination in the workplace, the need to earn a living. Over time, the neighborhood has become a reference point for those who decide to undertake the change of sex, often too easily able to obtain hormones and other substances that can lead to even serious psychophysical imbalances.

This year, Franchina wrote an open letter to the Municipality of Catania: “We are people like everyone else and you cannot cancel us from this space because it belongs to us and we belong to it, even if we do not we are always the rightful owners. Over the long years, these houses and their walls have been modeled, modified, and matured together with us. ” Franchina writes, with an open heart. “You can also raze the houses and buildings in the neighborhood but this would not be regeneration. You will find us in your condominiums, under the house, on the streets of the cities, creating more unrest and poverty. We are willing, if you cooperate, to give us shared rules for peaceful coexistence with all the inhabitants, those already present and those who will arrive in the future. “

The presence of foreigners in the neighborhood is often considered one of the major obstacles to the redevelopment of the district. In San Berillo live mainly Senegalese migrants and their children, many have been here for three generations. They are among the few who have decided to live in dilapidated houses, together with those who have not found accommodation elsewhere, with those who do not have a fixed salary.

There are not a few artists who have been interested in San Berillo, who have told the truth that lies behind their stories. What do they have in common? Perhaps the sense of emptiness that leaves the neighborhood, which sails into the depths of Catania like a wreck that no one wants to remember, inhabited by people no one wants to have near. Perhaps the desire to restore life and dignity to those forgotten streets, to people who are not recognized as people, and to show the beauty of the naked and raw truth to make it appreciated even by those who have never known a life of hardship.

I ended up there by chance, among the flowers of San Berillo, and its vitality caught me almost unprepared, it hit me, it marked me. Walking through the paths, I felt the load that the district has gone through, it exuded from its walls. This neighborhood, which has built itself, has welcomed anyone who has looked at the world and realized they didn’t look like it at all. The story that remains engraved on the colored stones cannot be wiped out by a simple redevelopment of the neighborhood: it is in its inhabitants, who have become its protagonists, who have modeled themselves and continue to shape its appearance, who have filled its streets with life, with love, with beauty. San Berillo is a different neighborhood, of course, it is a neighborhood that is not easy to digest, and for many it is often better to remain hidden, but it couldn’t be more authentic than it is.

2 thoughts on “The San Berillo District in Sicily”