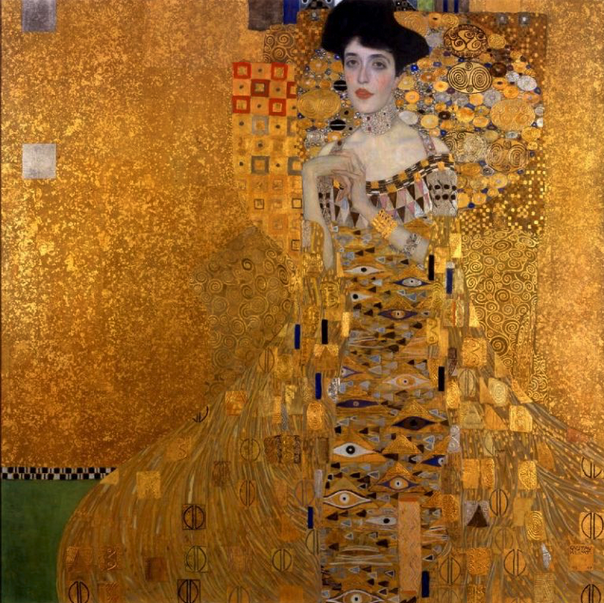 by Asia Leonardi for the Carl Kruse Art’s Blog

Before her face was associated with one of the most evocative works of art of all time, even before becoming the symbol of an incredible legal affair, Adele Bloch-Bauer was simply a beautiful woman. Born in 1881 in Vienna, Adele had grown up in the cultured and refined environment of the Austrian city. The beloved daughter of a wealthy businessman, Maurice Bauer, she married at eighteen years old Ferdinand Bloch, seventeen years older than her, and heir to a baron who had become rich in the sugar industry.

Worried with the limits that the rigid environment of the Viennese aristocracy imposed on her and tormented by the impossibility of having children, the young aristocrat developed a melancholy and complex nature that added attraction and mystery to her person. Those who knew her remembered her fragile, nervous nature, the habit of smoking, her ease with migraines and sadness, all characteristics that, taken together, gave the feeling that she was deeply unhappy.

In the photographs of the time, her features have the timeless beauty often associated with Jewish women: large dark and deep eyes, a noble nose, pale skin, and a sensual and expressive mouth. Also, Adele associated an uncommon charm with the gift of brilliant intelligence that led her to learn French and English by herself, to become passionate about the study of music, philosophy, and classical culture, and to dream — unfortunately in vain — to attend university courses, which at the time were closed to women. Together with her husband, she then decided to devote herself to an intense activity of patronage that led her to come into contact with the most famous intellectuals of the period.

An interesting face and personality could hardly have escaped the aesthetic sensibility of a lover of beauty, such as Klimt, the painter whom contemporaries jokingly called Frauenversteher — a connoisseur of women. Gustav Klimt, a famous figure of the Viennese secession period, had a particular predilection for female subjects, which were central to his works, and often did not disdain to make his models also his lovers.

His best-known works are those of the golden period in which, following the suggestions derived from a trip in Ravenna and the inspiration coming from the goldsmith tradition of his family, Gustav devoted himself to great compositions rich in symbolic details in which a strongly two-dimensional design and the use of gold leaf closely resembled Byzantine icons.

Although however, the artist already knew the woman from having met her in several of the parties that the Bloch-Bauer family hosted regularly, the idea to portray her was from her husband Ferdinand who, in 1903, commissioned a full-length painting from Klimt having as the subject Adele, and which should have been a gift for her parents.

The Viennese artist did not limit himself to simply carrying out the commission, but developed a real passion for the subject, coming to portray her more than once: this is an unusual choice for this painter and, precisely for this reason, he often speaks of Bloch-Bauer as the muse of the Viennese secessionist. It has even been hypothesized that the two were lovers, although in the painter’s letters there are no traces of a relationship with the woman.

It took Klimt three years to complete the first portrait of the beautiful aristocrat who, at the time, was just twenty-one: it is a perfectly square canvas (138 × 138 cm) which features the artist’s typical gold leaf processing, the female figure is portrayed standing while giving the observer an enigmatic glance that has earned her the nickname Mona Lisa of Austria. The Egyptian symbol of the Eye of Horus is obsessively repeated on the dress against the background of Byzantine-inspired decorations, transforming the silhouette into a sort of pagan idol. The model’s hands have a sensual and at the same time unusual pose.

One of the girl’s fingers showed a slight deformity that she tried in every way to hide, and the peculiar position likely derives from the desire to mask the small physical defect.
The painting was completed in 1907 and the first was followed by a second, completed in 1912, in which Ferdinand’s wife is surrounded by soft colored fabrics that enhance her delicate complexion and refined figure against a background dominated by red and gloom. Adele Bloch-Bauer also appears in the famous painting of Judith, to which she lends a very intense face shaded by long melancholy lashes and of which, in addition to the face, only the nervous and elegant hands and part of the torso are visible. It is also assumed that she is always the model portrayed in the artist’s most famous painting: The Kiss.

Ferdinand Bloch, deeply impressed by the work, decided to purchase not only the two portraits of his wife but also other paintings, to support Klimt and his art.
His wife, however, did not yet have much to live: on January 24, 1925, when she was still young, struck by a violent form of meningitis, she died in a few days leaving Ferdinand a widower. In her last wishes, the woman asks her husband to donate all of Klimt’s works, including the portrait, to the Belvedere Gallery.

But in 1938 the painting is one of the artistic treasures stolen by the Nazis from rich families in Vienna: the work changes its title and takes the name of Woman In Gold to hide the Jewish origin of the subject which would have been evident from the surname. Ferdinand Bloch is forced to flee to Switzerland and other family members must, instead, take refuge in America. Upon his death in 1945, the man left all his possessions to his heirs, including the famous portrait of his wife.

The painting seemed destined to end up on the list of expropriations made in wartime but, at the end of the 1990s, Austria passed a law that provides for the return of works of art stolen from the Reich: Maria Altman, niece and direct heir by Adele Bloch-Bauer, who had been forced to flee to America to escape the racial laws, will fight for a long time to have her right to the portrait of the ancestor recognized, who, in the meantime, had ended up in the Belvedere museum. Since it is practically one of the most famous works of art in Vienna, the legitimate heir, now elderly, will be forced to drag her country of origin into a lawsuit in the American judicial system.

After the final victory in the trial, in 2006 the painting was sold at auction at Christie’s by its rightful owner for 135 million dollars and was purchased by Lauder’s Neue Galerie in New York, where it is exhibited under a glass case.

The two canvases that portray her, however, are not the only memory that has survived to this day of the beautiful Adele: on her death, Ferdinand donated one of the most beautiful jewels that belonged to his wife to his niece Helen Marie Stutzova and she left it to, in turn, inherited from his daughter Charlotte Meyer. This is the famous Toi et Moi ring that went from descendant to descendant until it was sold at the Sotheby’s auction house for more than forty thousand pounds in December 2018.

The ring has a simple and elegant shape with two diamonds, one light, and one dark, of about two carats each and still today, seeing it, it is easy to imagine it in the beautiful hands of Adele, the famous woman in gold.

===========
The Carl Kruse Arts Blog homepage.
Contact: carl AT carlkruse DOT com
The blog’s last post was on the Monastery Festival.
Other articles by Asia Leonardi include the San Berillo District, the photography of Francesca Woodman, and on the action painting of Jackson Pollock.
Find Carl Kruse also on Fstoppers.

One thought on “The Woman in Gold: the Story of Klimt’s Muse.”