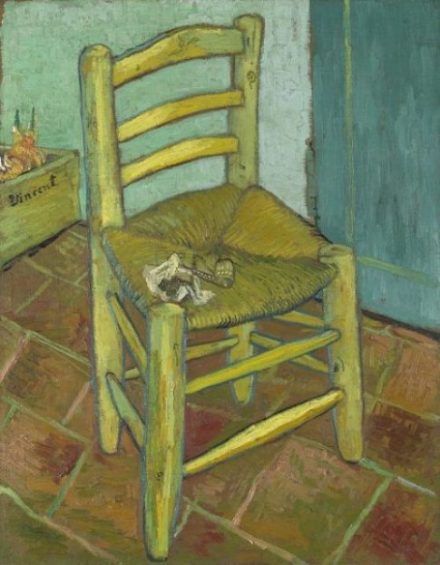 By Hazel Anna Rogers for the Carl Kruse Arts Blog

I first saw Vincent Van Gogh’s painting ‘Van Gogh’s Chair’ (1888) in secondary school, in the middle of an art class.

My art teacher had no particular regard for art history. She found it uninteresting, and it was never a fundamental part of the classes she taught. She was a tiny thing, my teacher, always dressed in bold, screaming colors and imaginative accessories. She more often than not wore startlingly high heels, which retrospectively I suppose must have been rather agonizing considering how long she wore them for. I remember a certain pair – they were hot pink stilettos, with some sort of adornment on the front that looked like a piece of candy.

I do believe she was quite the darling of many of the boys and it seemed like she played up to this role quite readily. Come to think of it, I reckon a few of my secondary-school teachers played up to that side of juvenile sexuality, probably to encourage good behavior and obedience. That isn’t to say it was only the female teachers. On the contrary, I have had a few (borderline) flirtatious male teachers teach me at one time or another during my secondary and college education. I have always been quite obsessed with the forbidden sexuality of those in authority, and I’ve certainly had many a teacher-crush.

Anyway, back to the art class. In my last year of secondary school, we had to paint a ‘final piece’, and deduce its contents on a separate written piece, dissecting it and commenting on the techniques we used to create it. I must say I really do despise self-reflection with regards to artwork. I know that, for myself, when I create something, whether it be written, painted, drawn, played…whatever it is, it is almost always spontaneously generated. Occasionally I will vaguely plan the ongoing trajectory of a piece I’m in the middle of so as not to lose creative fire, but I won’t generally plan prior to beginning it. Inspiration sparks at the most bizarre of times, and no plan or bullet point list tends to help me to get there, to that perfect peak of creative energy that suddenly begins to flow like a flood and ignite the best work. But, of course, one has to ‘feign’ planning in order to escape being reprimanded for not doing so. Dutifully, I searched through the limited collection of art books we had in class to search for ‘inspiration’. I came across a short text about Van Gogh, which detailed a few of his paintings along with a mini biography. I flipped through the paintings in the center of the book, then stopped abruptly. The chair looked back at me, and I stared at it. Such a lonely piece. So isolated and sedentary. I fell into a silence, and the noise of the world around me became a dull, quiet roar, like the sound of distant waves. It was like I was waiting for the occupant of the chair to return and light up his pipe. But he never came.

I had a class in art history this year, and in one of the weeks my teacher brought up Van Gogh when speaking of post-impressionism. While my teacher swept through pictures of the sunflowers, the beautiful night skies, and the vibrant cafes up on the interactive whiteboard, I thought about the chair. I decided it was essential I delve into it, that I dive into the painting that near brought me to tears upon my initial viewing of it. I was not always a believer in the dissection of art, as I was of the opinion that it would inevitably ruin the intrigue and beauty of it through over-analysis. But, through my study of literature and more advanced music theory over these past few years, I have learned that studying art in any form can bring one to enjoy a work even more than one did prior. I decided to dissect Van Gogh’s melancholic painting, to see what I could find in it, and whether I could find that lonesome character that had left his seat and his tobacco in such a hurry. Here is what I have come up with:

In deciphering ‘Van Gogh’s Chair’, an approach concerning the metonymy – substituting an object or attribute for a person or emotion – prompted by the painting I feel is essential. The chair, illustrated in oil-on-canvas, is clearly a daylight rendering, with a light source suggested as emerging from the top left, unseen, corner, and reflected onto the light-colored wood in thick, golden brushstrokes. The brightness and air of simplicity in the painting could reflect Van Gogh’s self-reflection. However, simultaneously, ‘Omens of tragedy [rumble] beneath thick smears of beaming yellow’, as contemporary poet Niall O’Sullivan suggested in a poem framed side-by-side with the image in the National Gallery.

The personalizing of his own chair as being metonymically associated with himself can be furthered by his positioning of his own personal objects on the chair; the hastily painted pipe (it is believed Van Gogh followed Dickens’s prescription of smoking for melancholia) and the open bag of tobacco. These intimate objects seem to be connected with the candle depicted on the painting Van Gogh did of fellow artist Paul Gauguin’s own ‘Chair’ (‘Gauguin’s Chair’ 1888). Perhaps he considered Gauguin’s ‘light’ as essential, not only to light the tobacco in his pipe, but to light up his own work. I will comment on Van Gogh and Gauguin’s artistic relationship, as well as the significance of the contrasting chairs he painted, in a moment.

The complexity of the configuration of the painting with areas of wider, continual brushstrokes (see the first front rung of the chair) juxtaposed to thicker, busier areas (the foremost chair leg), create a distorted three-dimensional image, elevating this mundane object to something rather more sinisterly representative of a despairing mental state, potentially pointing to Van Gogh’s own mental deterioration. This supports Victoria Charles’ notion that ‘Van Gogh’s life and work are so intertwined that it is hardly possible to see his pictures without reading in them the story of his life’[3]. Does this indicate that, for Van Gogh, ‘painting had become identical with life itself’[4], the only way for him to communicate the difficulties and pains of living?

I feel that a further analytical comparison of this painting to Van Gogh’s contrasting depiction, ‘Gauguin’s Chair’, is necessary to contextually analyze this painting. Both canvases were painted once relations between the once-amicable artists had become strained due to Van Gogh’s poor mental health. Van Gogh has hoped that his artist’s studio, the ‘Yellow House’, would become a studio for himself with Gauguin as his artistic mentor. But his vision of harmonious living with Gauguin did not last long, as after 9 weeks of living together Van Gogh started falling through a downwards spiral into deep depression and bipolar disorder. After Van Gogh sliced off his ear in a fit of violent anger he was sent to an insane asylum, and his dream of working with Gauguin swiftly ended. Van Gogh painted both chairs just as his relationship with Gauguin was becoming strained.

‘Gauguin’s Chair’ is a baroque-style envisioning in its exaggerated features and emphasis on ‘tenebrism’ (the dramatic use of light and dark). It is of a deep, sensual palate that is startling richer than that used to depict his own chair. This image seems to suggest a nocturnal exoticism and complexity that appears juxtaposed to the garish simplicity of Van Gogh’s own chair. These chairs are both ‘alive, like strange creatures’[5]. Van Gogh here employs the ‘intense colours and dramatic shapes…[that] anticipated Expressionism [the use of artistic distortion to create different emotions]’[6]. The light sources – a candle and a gas-lantern – create a far more claustrophobic image than that of Van Gogh’s own chair, which is lit by external sources, symbolic perhaps of Van Gogh perceiving Gauguin as self-interested and thus self-illuminated in this painting, though one cannot say for sure he felt this sort of animosity towards his fellow artist. By all accounts, Van Gogh was utterly bewitched by Gauguin’s artwork and was highly insistent that Gauguin should come and work with him to help him better his own art. Gauguin recounts in his memoirs how much of a dutifully hardworking artist and loving man Van Gogh was prior to his ever-increasing episodes of ‘madness’. Maybe the use of this internal, unattainable light indicates that Van Gogh perceived Gauguin as his last hope, hope that was swiftly dwindling.

Another aspect of the painting I wish to briefly discuss is its musicality, as I believe it is integral to understanding Van Gogh’s artistic technique. Before moving to The Yellow House, Van Gogh articulated to his brother Theo that the paintings he so viscerally envisioned he would come to paint in Southern France would be ‘a symphony in blue and yellow’[7]. Van Gogh’s persistent application of ‘words related to music – such as ‘harmony’, ‘piano’, ‘note’, ‘register’, ‘clarion’ and ‘scherzo’’[8] in written correspondence during his life can be used to analyse the painting of his chair. This painting seems indeed an homage to the so-called ‘Yellow House’ gallery he so dearly endeavoured to pursue with Gauguin. Its vibrantly warm autumnal palate echoes the ‘dark ochre to bright cadmium’[9] that Van Gogh ‘was continually comparing [to] the sounds made by the piano’ [10] during his piano lessons in Paris. The melodic use of a simple base palate in this painting isolates the chair in its own lonesome song, lingering on the edge of a climax into chaos. To me, that is what this chair evokes. An all-consuming loneliness fuelled by rejection and solitude. An attempt to create an image out of a void of emptiness, to make beauty from estrangement and a desperation to connect. I find it achingly beautiful and overwhelmingly sad. In this piece I feel that I can hear the profound music that so deeply affected Vincent – Wagner, Beethoven, Berlioz – and inspired his own creation. This chair, to me, is a painting of Van Gogh himself, of his life, a life despairing for a friendship and a dream so soon blighted, fearful of the darkness yet to come.

Quoted in Thompson, Paige, ‘How Vincent Van Gogh was Inspired by the Works of Charles Dickens’, pub. In ‘Sotheby’s’ (URL: https://www.sothebys.com/en/articles/how-vincent-van-gogh-was-inspired-by-the-works-of-charles-dickens), July 29th 2019

[2] Quoted in Paige Thompson, ‘How Vincent Van Gogh was Inspired by the Works of Charles Dickens’, pub. In ‘Sotheby’s’ (URL: https://www.sothebys.com/en/articles/how-vincent-van-gogh-was-inspired-by-the-works-of-charles-dickens), July 29th 2019