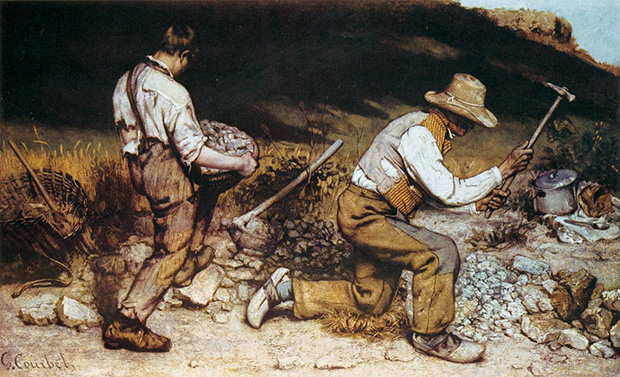 Realism tells tales like any other genre, and it is odd that we should be forced through much digression knowing that point. What I mean when I say Realism is the specific genre of fiction that wishes to imitate contemporary life in a ‘realistic’ manner. Realism has come to possess a high-standing position in fiction, perhaps because of its focus on being ‘realistic’, though the terms aren’t interchangeable. Somewhere from the birth of Realism, the idea and notion of what is ‘realistic’ began to be associated with the genre. This confusion shouldn’t cause other genres to be remonstrated for their disobedience to the Realist notion of fiction, or to art more generally.

If the term, Realism, were put to me, I would immediately conjure up the nineteenth century. Courbet and his manifesto to paint ‘real history’; Dickens and the convoluted tales of Victorian London. What this meant for them, and it was something remarkable, was seeing history as it was lived in their own time. Courbet wanted to paint life in nineteenth century France, not figures from Classical mythology; Dickens wanted to scrutinize the culture in which he lived. Realism made fiction relatable in a new and subtle way.

But as to being realistic, Dickens’ novels are full on inconsistencies and things that either aren’t true or are at least far-fetched. I’m not going to fling a novel aside if there are some inconsistencies, or ‘unrealistic’ things occurring. What then has Realism offered to vouchsafe an association with being realistic?  Victorian novelists were able to take large swathes of society and inspect them; compose a story through them in a form that is relatable and thought-provoking to the audience. The style of writing too, for the most part, took on a third-person narrator, an omniscient voice which the reader followed. Realism makes use of imagination to create events that could happen, and people that we might meet. It is this use of imagination painting itself as ‘realistic’ that gives Realism such force.

Realism united the storyteller with a vision of the ‘now’, bolstered by the ‘realistic’ framework. Realism is composed as any other genre of fiction or art is. The Realist artist wants to express something, to create something, as any other artist does – to bring something to attention, to express something from a different perspective. As for the case of Realism, there are solid grounds for viewing its formation as one directed towards social conscientiousness: Dickens’ semi-moralizing; Thackeray’s satires. Yet a piece of fiction Realism remains, and writing, as an ambiguous fiction, has always been troubled by its relationship with reality.

The story of Realism becomes complex when we cross into the twentieth century. The movements of the fin-de-siecle were more interested in style and expression than to show what was ‘realistic’ – but then again, this made a presumption between the link of Realism and the realistic, an easy connection that one might make. Yet what the outbreak of Modernism in the first half of the twentieth century shows us is a profound and incredible search for a form to express their time. This is arguably a search for what could be termed ‘Realism’. The fascination with the nature of time and the conscious mind made their work experimental but it does not mean that it was in any way ‘unrealistic’ considering what they understood about the nature of living. It was partly in search for a new Realism that gave rise to the multi-faceted complexity of Modernist art.

Nude Descending the Staircase No. 2 by Marcel Duchamp, 1910. One of Carl Kruse’s favorite Modernist paintings.

If we were to see genres, and stylistic forms of writing, as trying to come close to certain forms of reality, we would be closer to something like a working critical framework. Take, for example, James Joyce’s Ulysses, for all that it details, it is also a tapestry of forms which work in different ways to express specific things. A beach scene can be written in sentimental prose, the contemplative in a stream of consciousness. Ulysses is postulating that different forms work to express different sentiments of life, and what a true ‘Realism’ would entail is a complex intersection of the various forms.

Yet arguably, as opposed to the search for new forms, the classical nineteenth century Realism reigns. Why this Realism has such a prominent place in our artistic tradition is hard to answer with any certainty; it may be its inclusive nature; its desire to tell the tale of the common citizen, and its association with the realistic only adds strength and appeal. On another hand, it seriously limits our capability to contemplate other truths that experimental, speculative, and fantastical genres may be reaching towards. When we read Science Fiction, we comprehend the story precisely because we can play the detective. We understand patterns and an idea of coherency. These stories can cohere in complex and interesting ways to engage the audience, producing a whole range of emotional and intellectual attachment.

And it is all the more remarkable that genres such as Fantasy and Science Fiction can evoke emotion without the tendency towards grounding us in a resemblance of our own world – with all the sense of meaning which that has. In fact, it offers such a fertile ground for developing ideas that represent, and express, features of our lived experience in a way that could not be described so in a Realist piece of fiction. The freedom from the Realist frame gives us yet another method of discriminating what we make of the world and of ourselves.

The Realist frame sets out to cover all bases but clearly is unable to do so. Realism is readily relatable because its strict desire to imitate the experience of life, though what that means becomes ambiguous on inspection. We begin to see that Realism is only a kind of imitation, not the imitation of life. Realism works on a hidden presumption that its style, its kind of imitation should be the case, but it must be remembered, or at least contemplated, at what loss does this imitation come? The act of creation is also that of seclusion and the question of representation is a huge one.

Criticism which presumes a Realist approach to judge something can neglect the finer, and poetic, devices of a narrative. The position of criticizing any novel is no easy feat, and it needs to scrutinize the method of the work. It is always interesting when a critic formulates a vocabulary for judging something, but there is a danger of this vocabulary becoming prescriptive, leaving supposed ‘unrelated’ features by the wayside – like the use of Realism, criticism judges by one side of a work which may offer a multi-faceted interpretation.

Indeed, some things come down taste. If you don’t like something you’ve read, or seen, you’re likely to begin to think of reason as to why you don’t like it. If you land on ‘it’s not realistic’ then you can safely be done with the problem of disliking something for no reason. That the term ‘not being realistic’ can be utilized as a ready-made objection removes us from the work of actually discussing the work; it does not show whether this makes the work unsuccessful in its own objective, or if its universally a poor piece of art, it only shows a favoring of a kind of imitation.

The promotion of Realism, through its association of being ‘realistic’, cuts through the ambiguity of what it means to write ‘realistically’. To recognize genre as an extension of style, however, gives us a capability to discern how art works to express itself. It may be our tastes vary from this to that, but I doubt it is so absolute. Science Fiction and other speculative genres sponsor a reality of their own – the fact that we can understand them and sense their coherency solves any ambiguity around that matter. This is not to throw away Realism, it is a wonderful frame of expression and can serve as an excellent foil to other styles, other kinds of imitation. However, the dependability on, and the standardization of, Realism, as more than a stylistic approach, sincerely limits our thinking on the act of expression.

4 thoughts on “Thinking About Realism”