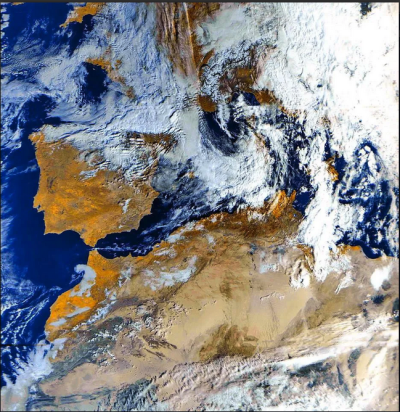 Artists work in many mediums – paint, wood, marble, words, music, dance, film. But there are some that journey beyond the traditional into radio signals, actual consciousness, neuroscience, dreams and outer space.

Meet Daniela de Paulis, an artist whose trajectory began with dance and traditional media who now focuses on the exploration of space itself, in its widest sense. She is a licensed radio and radio telescope operator, whose projects bridge the artistic and the scientific.

One of her projects is “Cogito in Space,” which examines the idea of exploring the universe with our minds. In this project, people’s brain waves are electronically captured by neuroscientists, converted into sound, and then transmitted into space in a symbolic departure from an Earth-centric to a Cosmos-centered perspective.

Another project is “Mare Incognito,” which looks at the gradual dissipation of consciousness during the act of going to sleep. Here, Daniela explores falling asleep, when awareness appears to dissolve, and our sense of self slowly shifts from an ongoing conscious life to a new dreamlike state. This project records Daniela’s brain activity as she falls asleep and then transmits it into space using one of the antennas at the Mullard Radio Observatory in Cambridge, England.

And yet another work is “The Dream Of Scipio,” named after the Roman general mentioned in Cicero’s book The Dream of Scipio, who described a dream in which he saw the Earth from the perspective of high above in space and how small the entire Roman empire seemed, just one small point on the planetary surface. Inspired by Scipio’s commentary, Daniela created an experimental artwork in which every day she displayed a modified image captured from a Russian weather satellite, with ever-changing geography and swirls of color, inviting viewers to think of their location as seen from 832 kilometers above, and trying perhaps to capture that feeling reported by so many astronauts of feeling more interconnected to Earth – environmentally, socially, politically – after seeing the planet from space.

Image from the installation The Dream of Scipio

On July 7, 2022, Daniela will join Bettina Forget, Director of the SETI Institute’s “Artist in Residence” program to talk about Daniela’s recent works including Cogito in Space and a project called OPTIKS. The conversation can be viewed live on YouTube: https://www.youtube.com/watch?v=exeTaAtBRA4

We encourage everyone to tune in to what should be a fascinating discussion.

===========
The Carl Kruse Arts homepage is here.
Contact: carl AT carlkruse DOT com
Previous articles in the blog include The Story of Klimt’s Muse, In Memory of Vangelis, the Art of Atari, and the Boros Bunker.
Find Carl Kruse on SETI.