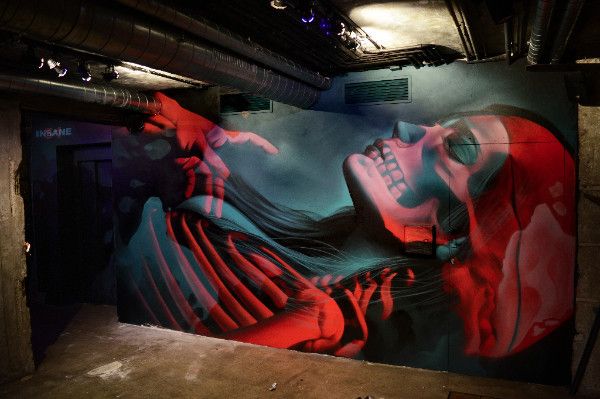 Stathis Tsavalias, known as Insane 51, has recently been characterizing the streets of Bristol (England) with a delicate practice of double-exposure. His formal education in the Athens School of Fine Art has led him towards the street canvas where he has successfully experimented with the large-scale plane. Overlaying faces give the illusion of depth, and at once shows the skull and the living face. They are not the discreet faces one may pass with a side-glance; the whole wall is transformed by the play between two worlds: the purely physical and the emotional.

Urban art was once found by chance. Chance walks in the conurbation, down stretches of alleyways, or, now not as much, in the process of being scrubbed out. It is physical and immediate; it is no longer only a brick wall, or a corridor of garages, but an un-housed canvas, a statement of place. Away from the gallery, urban art acquires successive intervals of freedom the further it stands from the institution; it jokes with the street-walker, cries with the indignant, embraces an anonymity reflected in the shuffle of daily footsteps.

Any urban surface can be a canvas, and the practice of urban art manifests as a kind of reclamation of an urban space. What graffiti tags do, or scrawls of complaint, is induce interaction. It is there to be seen by everyone. Although it is nominally true that any surface can be a canvas, we are all aware that not all surfaces have the same meaning; you will still find certain surfaces being re-painted after being tagged, and there are ‘off-limit’ places where art would quickly run the risk of being termed ‘defacement’: a statement of subversion.

That is where urban art, in the past and as of now, gathered impetus and power: in subversion. Taking note of mass-advertising, it stands starkly on the wall for all to see. It is a silent protest that echoes into the walls of the city street; a refusal to leave the slate clean. It confronts culture, turning the one-way traffic into a dialogue.

The street speaks back. The development of urban art has become a mainstay of expression in the 21st century city. Whole areas are now dedicated to this freedom to adorn. It is yet another thread in the web of city living that conjures up the experience of the city. It marks an area from the rest. It has also transformed a style of art that is dependent on the street as a site of execution. The street-artists have an entirely different material to work with, a different spatial plane to confront. It is defiantly placed, unable to be loaned to another city-space; it must merge with the concrete environment, characterize it, transform it.

Insane 51’s work is exemplary of the power that urban art can invoke in our cities. Its immediacy tells us first of reclamation, signaling an acceptance for an art to confront us in our streets. His is an art, perhaps indirectly born from subversion, that now stands to represent an effort to unify the environment in an interesting manner. It signals a kind of freedom to enjoy the pleasures of art, to remind the viewer that the city space is for the person.

====================
The Carl Kruse Arts Blog homepage.
Contact: carl AT carlkruse DOT com
Check out the street art of SOBR in another one of the Carl Kruse Blogs here.
Other articles by Fraser Hibbitt include the Monastery Festival, Vangelis and Comic Kids.
Carl Kruse is also on Buzzfeed.